I often get asked what my favorite lens is. It’s tough to choose. On the one hand, they’re all acts of creativity that I’m proud to put into the world. But I also know some are much better than others. And there are a few that really stand out to me as being some of my best work. The Alexander Hamilton lens would definitely be in that last category. Here’s the story of how that lens came to be.

I had seen someone create a talking one-dollar bill as an image marker with Augmented Reality before. But it wasn’t using Snapchat. I wanted to make something similar, but put my own twist on it. Maybe a 3D George Washington comes to life and chops down a cherry tree? Abe Lincoln delivers part of the Gettysburg address? Nothing jumped out as a strong contender. As I considered which bill to do, I had a moment of creative vision. Sometimes an idea finds you. Hits you like a lightning bolt. Demands to be made.

My eldest daughter had been obsessed with the musical Hamilton, written and performed by the insanely talented Lin-Manuel Miranda. Hamilton had been around for a while already and I knew about it but hadn’t really heard much of it before my daughter began playing it in the house constantly. Suddenly I was an expert. And as I stared at a ten-dollar bill on my screen, the two things came together into a brilliant concept– make Alexander Hamilton sing Alexander Hamilton!

It’s one thing to have a good idea, but as you know in the creative world, it all comes down to execution. I knew I was going to use the ten-dollar bill as the image marker. I had a snippet of the song. But what would be the best way to get Hamilton to sing? I tried a few things:

Now that I had my footage, it was just a process of overlaying the singing mouth on Hamilton’s face on the bill. It took some tweaking to get the colors to match. Then I exported the whole thing as an image sequence to build the Image Marker lens. The entire process from start to finish took me about a day. I launched it and posted a video to LinkedIn, sharing it with the business-oriented social media network.

My initial feelings about the lens were that of satisfaction. I didn’t walk away feeling like anything was missing or could have been done better. I was a bit concerned with using a clip of music from the Hamilton musical. Other colleagues had warned me that I might get the lens taken down for copyright. But I was hoping they would allow it since I was only using a small part of the song and it wasn’t something that I was profiting from anyway. Reactions from people using the lens were very positive. Lots of likes to my video. But the lens never got the kind of views that other face lenses or more pop culture-friendly ideas generated. Image Marker lenses are never that popular and you needed a $10 bill to use it. I mean, who carries cash anymore these days? I settled myself that the lens was a good idea, but a niche one. It’d probably end up just being a party trick or something.

The real testament to the power of this lens came later when I flew to LA for Snap Partner Summit that following spring. It was a first-of-its-kind event on par with Facebook’s F8, or Apple’s WDC– filled with industry professionals from many different industries and corners of the map. I was attending in my capacity as an Official Lens Creator, so the only people I knew were other lens creators. By the time of the keynote speech, I had withdrawn inside my own circle of introversion and had hardly spoken to another person. Then a miracle happened. In the middle of the presentation, as they were talking about Snapchat’s new AR Bar tool for image recognition, they said “Snapchat can even make a $10 bill sing.” The music drops out and the video cuts to ALEXANDER HAMILTON lens in action. I had to pick my jaw up off the floor.

Speaking to the people at Snap later, I found out that my lens was actually one of that the executives liked to play with and show around. In fact, they had shown it to Lin-Manuel Miranda himself to get permission to use it in the presentation. He apparently loved it. I was completely floored. To my knowledge, I’ve never had my work reach such lofty heights before. In fact, Snap continued to use that lens in their presentations large and small around the world. It may not have been my most popular lens, but I will say that it might be the best idea-to-execution for a lens that I’ve ever made.

To try the lens yourself, use this Snapcode or click for a link:\ (You will need the image of a $10 for it to work 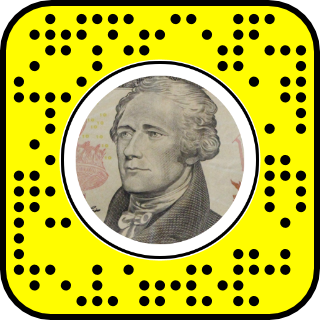